A Guide to Digital Financial Assets

Part I: The Basics

Why don’t people just use the traditional financial system?
How do people typically buy digital assets?
Which security features are common for apps to have?

Part III: Digital Assets in Pop Culture and the News

What are NFTs?
Why does Elon Musk tweeting make the cryptocurrency news?

What are digital assets?

Digital assets are defined1 as “Anything that can be stored and transmitted electronically, and has associated ownership or use rights.” This definition is broad, and can include anything from digital photographs to cryptocurrencies to digital titles of ownership to physical goods. This guide will focus on digital assets which are most commonly used as stores of value or for payments as part of a financial portfolio - which include cryptocurrencies, stablecoins, digital titles of ownership, and central bank digital currencies (CBDCs).

What is fiat currency?

In order to understand digital currencies and assets, it is important to first clarify what is fiat currency, commonly thought of as “traditional” money in today’s terms. A fiat currency is legal tender that derives its value from its issuing government rather than a physical good or commodity2. Essentially, it is what people think of when they think of “money” - it’s US dollars, Euros, Mexican pesos, etc. Fiat currencies have no inherent value outside of a government issuing it - a US dollar bill is only worth the paper it is printed on without the US government backing it.

Fiat currencies are a progression from the gold standard, where governments used to guarantee that issued currency was backed up by a certain amount of gold as a way to build trust in the currency. Gold, which has intrinsic value as a precious metal, was historically used to back currencies as a way to offer credibility.

A cryptocurrency (“crypto”) is a digital currency that is secured by cryptography. For the most mainstream forms of cryptocurrencies, users agree to a specific price to buy a token (unit) and can then hold (keep) it. Cryptocurrencies with prices that are not pegged to anything depend in large part on the hype surrounding them.

Cryptocurrencies were originally designed to bypass traditional financial institutions and allow people to transact in a decentralized manner. The key piece of technology that enabled this was the blockchain (a decentralized type of protected database, described further below). 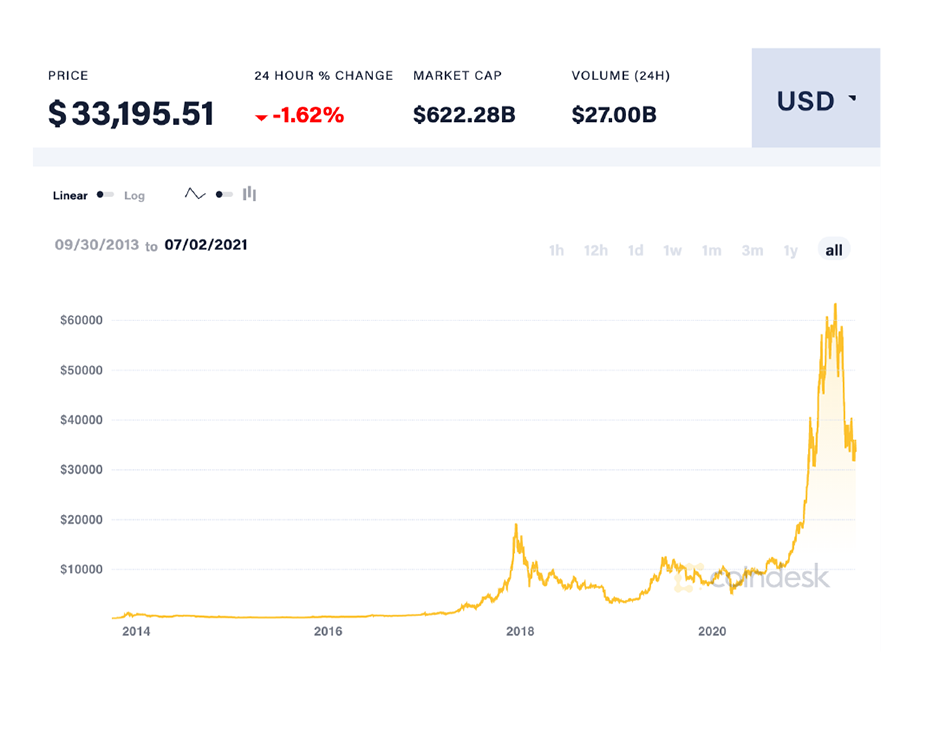 Bitcoin, the first and most well known cryptocurrency, used to be worth around a dollar a decade ago, then its value increased because more and more people were interested in them, creating additional demand and driving the price up - similar to stock fluctuations. Unlike stock fluctuations, there is not something of inherent value backing the value of a cryptocurrency - meaning that prices can get caught up in a bubble, then drop quickly and even to zero.

There are thousands of cryptocurrencies, the vast majority of which are relatively unknown and not traded widely.

Despite all the volatility that comes with cryptocurrencies, more and more traditional financial institutions and governments are examining investing in them and lower-risk ways to integrate them into their portfolios. Major banks and other traditional financial institutions are beginning to invest in cryptocurrencies and offer them as parts of their portfolios.

Stablecoins are a type of cryptocurrency that aim to keep their value pegged to an external reserve asset, like the US dollar. The idea behind this is that there is underlying collateral to the currency, protecting it from the volatility of bitcoin and other uncollateralized cryptocurrencies. Stablecoins are one attempt to offer both the transparency and speed of blockchain while minimizing the risk associated with cryptocurrency. Well-known stablecoins include Tether and USDC, which both peg their prices to the US dollar.

A currency peg refers to when a money issuer (a central bank or stablecoin issuer) establishes a specific exchange rate for one unit of currency towards another currency or basket of currencies. These specified rates are called fixed exchange rates. One example of a pegged currency with a fixed exchange rate is the United Arab Emirates, which pegs its currency, the Emirati dirham (AED), at a rate of 3.67 AED = 1 USD.

With stablecoins, a person buys a coin (unit) from an issuer, trusting that the provider will maintain a reserve asset equivalent to what they promise -$1 USD to 1 USDC token, for example. When a person wants to cash out, they trust that the issuer will sell them back one dollar in exchange for their one USDC token. The buyer does not own the currency that their stablecoin is pegged to until they cash out. Asset prices thus stay much more stable than unpegged cryptocurrencies, with volatility coming either from changes in the value of the reserve asset (like the US dollar weakening) or in trust in the issuer.

What is a digital title of ownership?

A digital title of ownership is an electronic legal document that confers ownership of a physical or electronic good - like an electronic title to a car or deed to a house. The goods can be anything that someone can legally own - gold, cars, pineapples, etc. With most digital titles, it's more technically complicated than just emailing someone a PDF that says they own something. These titles use blockchain technology in order to ensure equivalent security (and more convenience) than traditional paper documents, and are legally binding.

Digital titles of ownership are not considered a cryptocurrency or a stablecoin, because the purchaser of the title is not purchasing a token that represents the physical item - they are buying the item itself.

For example, a G-Coin token is a digital title of ownership to one gram of a gold bar weighing one kilogram. When a user purchases a G-Coin token, they aren’t purchasing something that represents gold - they are purchasing an actual piece of a gold kilobar that is held by G-Coin in a vault. The digital title allows for faster, smaller, and more affordable transactions than if G-Coin were to mail pieces of gold out every time someone made a transaction. Instead, G-Coin has secure vaults that are audited by third parties to ensure that we hold as much gold as we sell as titles, or G-Coin. Users can thus easily transact with the titles of ownership, and can cash out or even ask for their gold to be mailed to them at any time.

What are central bank digital currencies? 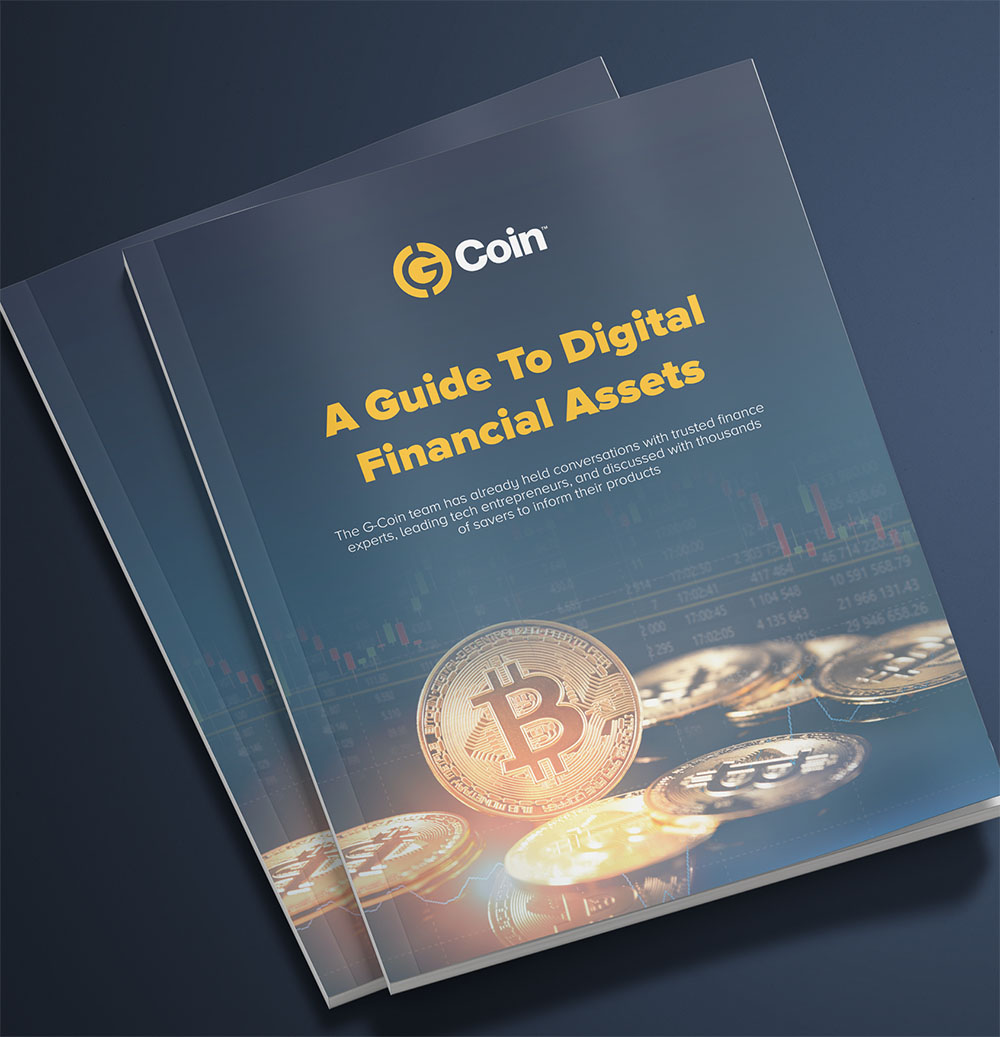 We’d like to offer you a free copy of G-Coin’s Introduction to Digital Assets for the 21st Century (Summer 2021 Edition). It’s for people who want to understand the bigger picture of modern financial tech and investing, but also don’t have the time to read every financial article or the patience to follow all of Elon Musk’s tweets.